I'm delighted to welcome Esther Ross-Watson to my Blog today!
She is a dearly loved member of our Kerith family. She and her late husband Michael served as missionaries for many years. Esther bravely made the decision to travel again, and she has recently returned from Indonesia. Here's her story: 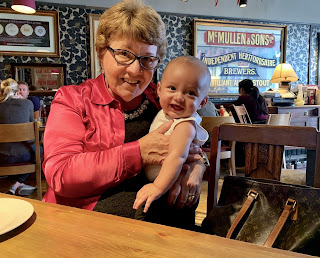 Whilst Michael was on his last days on earth in August 2017 he received a request from the Island of Madura, Indonesia asking us to return to the town of Pamekasen, Madura, Indonesia where we had begun our Missions work in July 1973 exactly one year after we were married. They were keen to have us see what God had been doing in the years since we’d moved on and we excitedly said ‘Yes’ we will come!  Obviously that had to go on hold for a while because I didn’t feel I could, or even wanted to go alone!

Anyway around March/April time 2018, I begun to feel a gentle nudging of the Holy Spirit urging me to think some more about it! It was like a feeling of wanting to know for myself what had been happening and that I needed to be intentional about my decision to plan a trip across to the Island. I was fearful to go alone because Madura was, and still is a 99% fanatically Muslim Island, and we had many negative memories of our five and a half years working there! Rotten eggs, tomatoes and uncouth words and spitting seemed to regularly come in our direction. Plus many other hurtful happenings which could spoil and destroy, but I finally knew I had to go!

I made my plans with my family in mind and felt good about it! Mario, Angela, and baby Kade (4 months old) would have a holiday in Singapore and I’d spend the first six days with them. Then with the advise of a very dear pastor and friend I would spend the next six days in East Java and decide how we would organise this. I presumed it would be me with another very special lady friend. Unknown to me, a team was being arranged for us to stay in a hotel and spend time in prayer and worship and warfare.  I had no idea where the money was coming from to do all of this but we had like a mini conference lifting Madura and it’s people to Jesus. Breaking the chains of darkness and releasing life and freedom to the Madurese people. I was so excited and wondered what was coming next!

Then it was Wednesday and I heard it being discussed that a twelve seater mini bus would be waiting outside the hotel to take twelve of us to Madura! No need to go across the Straits of Madura on a boat any more. A bridge had been built across to the island. I remembered meeting some Young missionaries who had  prophesied that after the bridge was built the gospel would come to Madura!

So, finally twelve of us, different nationalities but almost all Asian, mounted the bus and    we sang and worshipped God together as the driver skilfully drove the bus for five plus hours along narrow roads, cluttered with animals, chickens and humans and all kinds of traffic. I was so excited to be going back to Madura despite all kinds of noises and mosque sounds, motor bikes becaks (three wheeled bikes), buses, trucks and children. At least we had air-con and talked non-stop to one another.

Driving along the coast reminded me of the first time we went to Champlong beach to swim, but discovered the beach was a toilet and we kept treading in human excretion! On our way back to Java we stopped at the beach and what a change it all was with many people swimming like in the West. Fishermen were bringing in the fish and people were buying and selling at the market. There were even toilets that were relatively clean!

On arrival in Pamekasen the mosque was greeting our arrival. I couldn’t see anything I remembered and was desperately looking for our old tumble-down church where we taught our early believers. I was looking for the first home we had with rats, cockroaches, a hole in the ground for the toilet and then suddenly the bus was pulling on to a driveway with a sign which said ‘Jalan Kambodia’! Then I realised this was the street our church was on - Kambodia Street! Nothing seemed recognisable. As we got off the bus I saw a new sparkling modern church and people waiting to feed and water us after our long journey! On the site of our old house was a brand new modern manse and I was still trying to work it all out. How could this be? Before eating we couldn’t wait to go into the church with a balcony which would seat probably 200 people. They told us that they had around 150 plus attending with youth and children. Neighbours were kind and no longer seemed troubled by Christians being in their street. The mosque blazed out its welcome and all seemed peacefully content that Christians were living and worshipping so close to them.

After eating I was asked to come and pray with a young Madurese girl who had come to know Jesus. She was wearing her Muslim clothes but had invited Jesus into her life.
A lovely young couple from Java were pastoring the work and seemed very happy to welcome founder members to their church. How good and gracious is our God! It hardly seemed possible that in 1973-1978 we’d had so much to contend with and much sickness and we had often wondered if it was worth it all. I have no doubt is saying that it was worth it all! Sickness, disease was rife amongst us but Jesus kept us there for five and a half years and we can now truly say that Jesus has done ALL things well - Very Well!

On the way home back into Java we had great joy in visiting an amazing orphanage run by a lady called Ibu Hannah. She used to feed hundreds of Madurese kids under the bridge and clothe them. What a story, too long to tell here, but it really glorifies Jesus! Madura has changed because people have seen Jesus in action! Thank you Jesus for giving us the opportunity to serve you there in Madura! 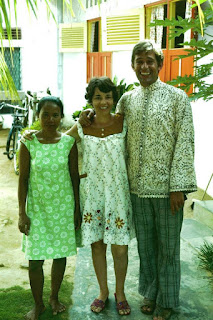 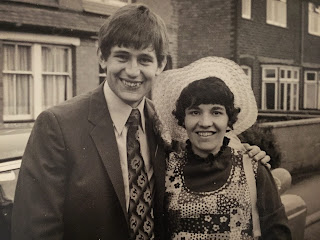 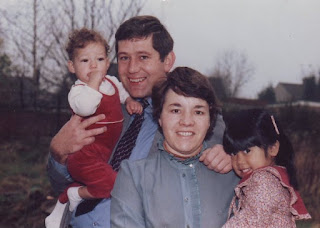 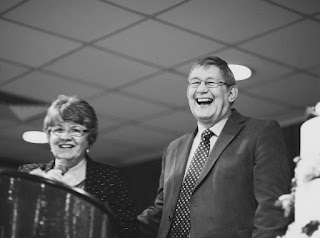 Would you join me in this Prayer?

Thank you God for the legacy that you left behind in Indonesia through the faithful years of service by Michael and Esther.
Thank you for transformed lives in Madura, the fruit and evidence of Your work.
Thank you for safe travels for Esther and her family...and for her safe return!
Thank you for all we can learn and be challenged to do through Esther's story.
Thank you that You have plans and purposes for each one of us to fulfil, bringing heaven to earth.
Use us, place dreams inside us, speak to us and help us to listen and then to be obedient
In the name of Jesus, Amen

January 11, 2010
"... Nobody has a perfect life - everyone else's life looks great ..but everybody has challenges. We're constantly judging our insides against everyone else's outsides " Ruthie Henshall on Woman's Hour last week So true!
Read more