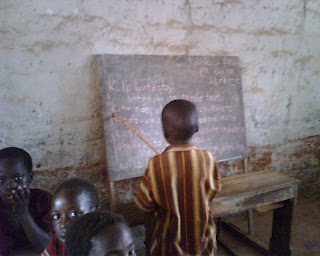 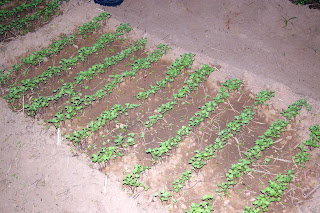 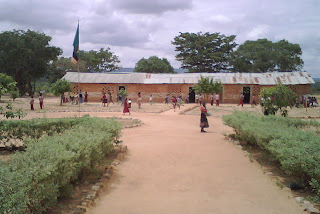 When we visited Serenje in 2007 we spent 3 days living with families in the villages. It was an incredible experience, and Simon and I stayed with a Grandmother called Jean.She generously shared her home, food and time with us. Simon and Ben planted maize in the fields with her. Meanwhile, I asked whether I could visit a local school. So 45 minutes of walking through the paths and fields later, we arrived at Kankoso Basic School.
There 92 Basic (Primary) Schools in the Serenje region - most of them are in very rural locations. They serve the educational needs of the surrounding small villages(most village communities seem to be clusters of between 3 and 20 individual family huts). Some Basic schools are in the Serenje Town (The Boma) and that is also where the 3 Secondary schools are, as well as the Teacher Training College.
I met the Head Teacher Mrs Nsululu and she was so generous with her time, showing me around the school and introducing me to staff and pupils. After time in the classrooms we talked in her office about possible links with UK schools - and what sort of support they would benefit from.One of the most pressing needs was for a school garden - not a pretty flower garden, but a vegetable garden. The school want to grow vegetables and crops so that they can feed the children a meal. At present, the children only have an evening meal back in the villages. So they have no food at all throughout the school day. The staff want to feed some breakfast to the children - you can imagine that this will inevitably have hugely positive effects on their concentration and learning.
When I returned to the UK and to the school where I work part time (Sandy Lane Primary, Bracknell) I chatted to our Headteacher Mrs Norris, and the response was overwhelmingly positive that we should form some links between our two schools. The children, parents and staff enthusiastically planned fundraising events so that we could support their initiative for a school garden. Money was raised at the summer fete; and through cake baking; car washing ;film events and other pupil-led initiatives. We also formed an "African group" of pupils aged 7-11. They have coordinated Assemblies and presentations to the Governors. They have also organised letters to be sent; and participated in a great project with Bracknell camera club - sending over photos and written descriptions of school life in Bracknell.
It was fantastic to visit Kankoso School again on this visit. The light was fading, and we'd had a busy day full of driving and visiting projects. However, we were met with a tremendous welcome once again, and it was so grest to meet the staff and to see the progress they have made. The money that Sandy Lane raised was used to buy gardening tools (hoes, wheelbarrow,sprayers, rakes, watering cans) and fertilizer; also maize, onion, cabbage, rape and onions! We were so thrilled to see the seeds growing! The children have returned to school now, so they will be planting out the seeds - we're hoping to hear good news soon of a great harvest!
It is a fantastic opportunity to get to know Kankoso School, the staff and pupils. It's such a privilege to be be able to strengthen them and help them out at the start of this garden initiative.They are the ones doing the hard work and following it all through!
The link is not without its difficulties including the frustrating length of time it takes to communicate with a rural school that's without electricty! However, for all involved, it's a GOOD THING - and one we're learning about and developing as we go. We're right at the begining of tis process - it would be wonderful to see other local schools,hospitals and businesses all linking with Serenje.

October 24, 2018
I'm delighted to welcome Esther Ross-Watson to my Blog today! She is a dearly loved member of our Kerith family. She and her late husband Michael served as missionaries for many years. Esther bravely made the decision to travel again, and she has recently returned from Indonesia. Here's her story:  Whilst Michael was on his last days on earth in August 2017 he received a request from the Island of Madura, Indonesia asking us to return to the town of Pamekasen, Madura, Indonesia where we had begun our Missions work in July 1973 exactly one year after we were married. They were keen to have us see what God had been doing in the years since we’d moved on and we excitedly said ‘Yes’ we will come!   Obviously that had to go on hold for a while because I didn’t feel I could, or even wanted to go alone! Anyway around March/April time 2018, I begun to feel a gentle nudging of the Holy Spirit urging me to think some more about it! It was like a feeling of wanting to know
Read more

August 08, 2015
Yesterday, I met one of my heroes! Bobbie Houston of Hillsong is a beautiful woman! I love her teachings, her godly wisdom, her self deprecating humour. I love the way she leads the whole Colour conference and Sisterhood movement. I listen to her podcasts and read her articles and books. Here at the Global Leadership Summit in Willow Creek,Chicago, her husband Brian gave the most extraordinary, vulnerable and honest responses to Bill Hybel's interview ( notes here) He was signing books at the end of the break and as I turned a corner, there she was! Not being mobbed by fans, but just chatting with a couple of people. Not sure if many of you realise this, but I'm actually an introvert, and quite shy. No really, I am! There's no way I would confidently walk up to someone I admire and begin a conversation! So I walked away. But as I was walking, I thought about how much I'd regret not being brave enough to say Hi..or to thank her for her
Read more